Preface to the book

I am not a photographer. Back in the late 1990s, when I took these photographs, I didn’t really know what I was doing. I mean, I knew how to use the light meter, the ASA gauge and the lens on the old battered Canon that my father had used and then given to me, but no more than that. I didn’t use a tripod, knew nothing of the various types of film available (other than the fact that there was outdoor and indoor), or how to develop the shots that I took. But I knew what to shoot or, at least, what I wanted to shoot.
As a political activist, I was involved in the efforts to protect the community gardens in the lower east side of Manhattan, which were then under attack by the Giuliani Administration. Originally planted on unused city-owned land in the 1970s and 1980s, these gardens had been cleared, planted and cultivated by groups of volunteers (usually people from the immediate neighborhood). Unlike “Victory Gardens” and other measures taken during emergencies (war or severe economic depression), community gardens are intended to reclaim public space as well as produce food. When completed, a typical community garden includes flowers, plants and trees; places to sit; and places for children to play. Gardens can also include small bodies of water (ponds), small houses for storing equipment and materials, and artwork (sculpture, pottery and/or painted murals).
To the Giuliani Administration, these beautiful little gardens weren’t minor miracles, oases in the middle of a vast urban desert, or centers of the neighborhood’s social life. No, they were merely pieces of property, “lots,” undeveloped to the precise extent that no buildings stood upon them, and the people who cultivated and enjoyed these gardens were unrealistic dreamers, freeloaders, and even Communists. (“If you live in an unrealistic world then you can say everything should be a community garden,” Giuliani once said. “This is a free-market economy. The era of communism is over.”)
Staring in 1996, and culminating in 2000, when it was forced to stop by a combination of forces, the Giuliani Administration summarily terminated the licenses that the gardens maintained with the City through Operation GreenThumb, and attempted to sell these lots to self-avowed developers who had close ties to City Hall. In too many cases, Giuliani was successful; community gardens were bulldozed and buildings put up in their places.


I knew that, as am amateur photographer, I could not capture the beauty of the gardens themselves, that is, the flowers, bushes, trees, little houses (casitas, in Spanish), pathways, chairs and benches that filled such places, not to mention the people who frequented them. These beautiful things and beings not only existed in three dimensions, but also moved around. Other photographers – real photographers – had already captured them. If not, it was up to them, not me.
Instead, I concentrated on an often-overlooked detail. Some of the gardens were surrounded by murals, paintings and instances of graffiti that were really beautiful, and, more often than not, full of social and political content. These facts appealed to me, not only because of my own political engagements, but also because of the relevance of those “old” images to the events then unfolding. La lucha continua (the struggle continues), proclaimed some of the murals at La Plaza Cultural. Yes, it did back then, and it still does today.
Because these murals were flat, two-dimensional creations that did not move, they were relatively easy to photograph. All I had to do was get there when the sun was shining, hold my camera steady, and take as many shots as I could afford to have developed. I could not be assured that, if the shots I’d taken hadn’t come out well, I could simply return and try again. The police and the bulldozers might already have done their work.
Between 1997 and 1998, I photographed the murals in a total of six community gardens in the LES. I have presented these gardens in alphabetical order, and have provided as much information as I thought would be useful and interesting.
A few of these photographs were displayed in New York City in 1998, most notably between 15 February and 15 March 1998 at Blackout Books (50 Avenue B), which was one of the centers of political activity in the LES. Some of these same images have appeared on my website, www.notbored.org, where I also posted a detailed chronology of community gardening in the area. (This chronology has been adopted and expanded for the one that appears at the end of this volume.) But, taken as a whole, these photographs have never been exhibited or published before.
Bill Brown
Cincinnati
February 2011
Posted by WJB at 7:32 PM No comments:

Email ThisBlogThis!Share to TwitterShare to FacebookShare to Pinterest
Labels: preface

How to buy a copy

To order a copy of Fenced Off, Obscured or Painted Over:

or visit the website of the book's printer, Lulu
(postage will not be included).
Posted by WJB at 2:34 PM 1 comment:

A total of forty-nine full-color photos of the murals in the following community gardens in the LES circa 1997:

-- Chico Mendez Mural Garden, 509 East 11th Street. (This garden was destroyed in 1997 and only one of the murals is still visible.)

-- Children's Garden, 194 Avenue B. (The mural is currently completed obscured by foliage.)

-- Earth People 8th Street Casita Garden, East 8th between B and C. (This garden was completely destroyed in 1998 and was part of Eva Cockcroft's "The Lucha Mural Park.")

-- Jardin Bello Amanacer Borincano, 117-121 Avenue C. (Most of this garden was destroyed in 1998. What remains has long been fenced off.)

The book also includes a chronology of important events between 1970 and 2010.
Posted by WJB at 2:27 PM No comments:

Email ThisBlogThis!Share to TwitterShare to FacebookShare to Pinterest
Labels: contents 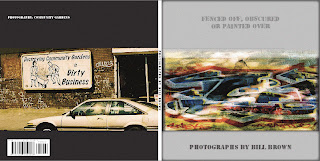 The book's cover. Designed by Susan J Hull.
Posted by WJB at 2:17 PM No comments: